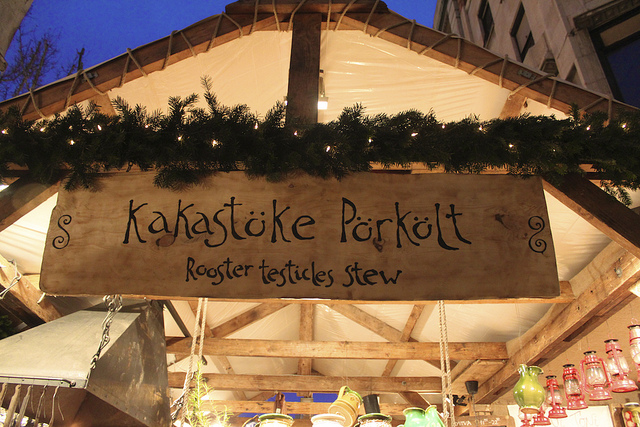 Yet now I find myself in Hungary, a land of fellow light haired, light eyed people, and the plug on my neon sign blinking, “Foreigner, please talk slowly or stick to charades” has been yanked from the wall. Now when I walk into a store, people don’t treat me like a toddling three year old. Of all the nerve, they treat me like an adult.

This departure from the norm I became accustomed to over the past year so surprised me that for the first week when people spoke to me in Hungarian, my mouth would inexplicably drop and my eyes would take on a dazed glaze that, when seen in my students, elicits the reminder to turn your brain on when others speak. In that amount of time, of course, the kind Hungarian greeting me sits awaiting a response, any response, their stare often turning skeptical. I suspect they think that either A) I am an idiot, B) I am a foreigner, or C) I am an idiot foreigner.

Operating under the theory that if you use multiple sources, you can learn a language in no time, I now have no less than three Hungarian apps on my iPod, a Hungarian-made-easy book on my shelf, hours worth of phrases available on CD, an on-line class in progress, a guide book perpetually in my pocket, and post-its flapping all over the house. Luckily, I now know the word for table and salt, which I expect will be indispensable. Of course, this assumption really hinges on this student exercising self-discipline. I suspect that since I’m the student, self-discipline might be the missing link so far in my language learning endeavors.

In my defense, Hungarian is hard. When I use it to a fellow teacher at school or the bus driver, my tongue grows in my mouth and the words come out clunky, like dropped rocks. Between the ü’s, and the dzs’s and the poly-syllabic words that stretch on like the Great Wall of China, speaking Hungarian feels like unspooling the whole rope of footlong gum and sticking it in your mouth, obscuring anything that might come out.

I remember years ago Carriage Hills had a neighborhood block party at the dead end of my street. I remember one crotchety neighbor called the cops angry about the noise of children laughing and neighbors enjoying each other’s company. I remember the mosquitos were thick and we went to bed with bumpy, speckled legs. I remember going to the grocery store with my mother while she bought a tub of potato salad for the smorgasbord and successfully negotiating for a footlong roll of Bubblicious Very Berry Gum. I remember putting the whole thing in my mouth at once, carefully ignoring my mother’s directions. At first I saw her point, but after awhile, it wasn’t so bad.

One thought on “Ruminations on the Hungarian Language: Take Two”