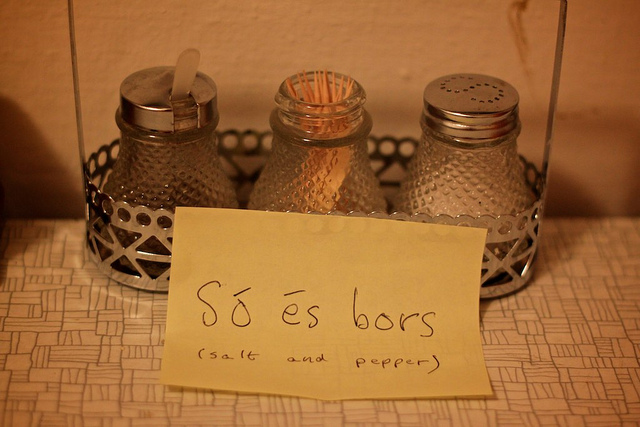 Making my way past the supermarket’s overflowing crates of pale green paprikas and stacked tubs of sauerkraut, I found one phrase sliding through my mind again and again, like a slideshow with a solitary picture: “Nem beszélek magyarul.” I don’t speak Hungarian.

And indeed I don’t. With the exception of this phrase and a few others struggling to be pronounced in my mind, thus far my first graders know about as much English as I do Hungarian (though thanks to their stubborn efforts to distract me from teaching, I learn more everyday). Yet there I was, mentally gripping this phrase, “Nem beszélek magyarul,” like a child clinging to a flashlight, ready to strike at monsters in the closet.

And just like those nonexistent creatures hiding in the dark, is there really anything to fear in the supermarket? Of course not. I’d been there before, and unlike grocery stores in Korea, the contents on the shelves were largely familiar, sometimes with bilingual labels. If worse came to worse, someone might, gasp, talk to me! Soon after, they would realize I am not the best candidate for Hungarian chit chat and that would be that. Or, just as likely if my experiences so far are any indication, that person may reveal they speak English after all, and I would get the interaction with locals that I’m here to find. Either way, I’d be none the worse for wear.

Still, as I contemplated the produce aisle I was surprised to feel a wave of unexpected anxiety seeping in that I knew was unwarranted. Rational or not, I was helpless to quiet my instincts kicking in with this one defensive phrase, “Nem beszélek magyarul.”

In retrospect, this irrational response isn’t so unexplainable. When you move to a new place, especially a new continent and new country, even normal elements of daily life can present a challenge. Whether it’s setting the washer to tumble dry your clothes (a puzzle that demanded a week and the kind effort of four people to resolve), ordering water without gas, reading street signs, or checking out at the grocery store, my list of things to figure out reaches the floor and then some. While each item is manageable, it can still feel like a scramble up a never-ending hill towards feeling comfortable and competent in your surroundings. A language barrier can so easily become the concrete focal point that appears to be the one thing keeping me from shortening that list. “If only I could speak Hungarian,” becomes the pesky message behind each frustration.

In truth, time is likely all that is needed to resolve such issues and become the independent adult I was when I entered this country. Of course Hungarian wouldn’t hurt, but even without becoming fluent, I know life can become more than manageable in this country. It’s hard to be patient while the first stage of becoming familiar with a new place passes.

In the end, I went on to buy my groceries, stand in the checkout line, and walk out the door without ever having to explain my language abilities. Another lesson that, as foreign as things may seem on the backdrop of a new country, things once mysterious often reveal themselves to be familiar after all.

2 thoughts on “Nem Beszélek Magyarul: Ruminations on the Hungarian Language”