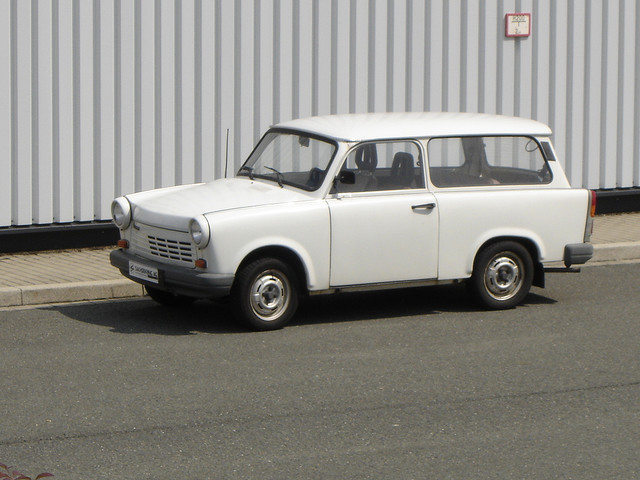 Prior to my arrival in Hungary about a month ago the only Trabant I had seen was on display at Checkpoint Charlie in Berlin amidst the plethora of East German communism memorabilia. The Trabant, or Trabbi as they were affectionately known, was the only and official automobile of East Germany. The fabled vehicle survives, for most, only through the myths and legends that precede the brand that fell with the Berlin Wall.

“Wasn’t it made of cardboard or something flimsy like that?” I asked Harald, the mid-fourties German I had the pleasure of WWOOFing with this August.

“No,” he replied, searching for the proper translation, “they were made from duroplast,” he explained, “which means they never rust.” One of the Trabbi’s few attractive features, then, is that you can drive them through twenty or more brutal winters in North East Germany and never see a bit of material decay, but “as soon as you crash it, it’s completely irreparable.” They were also incredibly uncomfortable. As Harald explained, the steering wheel was only slightly left of center, and bucket seats up front, coupled with wheel wells that crowd the floorspace, made riding shotgun a little awkward.

“And they were dirty right?”

“Oh absolutely,” Harald confirmed, “because they burn a mixture of gasoline and oil, similar to a boat.”

So why were Harald and I were discussing the notorious machine while working on an organic farm in rural Hungary? We saw one in the flesh and still moving, or in the duroplast, while driving from to nearby Kistelek on our Saturday break. Harald seemed at least as shocked as I was, as the last Trabbis rolled off the line in 1989, making that particular car at least 21 years old. They were so unpopular that the factories essentially went down with the Wall, possibly even faster. According to Harald, they were so detested by their owners behind the Iron Curtain that they were literally ditched at the borders for some unfortunate soul without the means of purchasing a western car.

“So, if you wanted a car in 1989, all you had to do was go across the border and have a car.”
At Checkpoint Charlie—or somewhere near it—you can pile five people into a Trabbi and take one for a spin—a premium tourist novelty spin, that is. Since arriving here I have seen dozens of them, adding to the silliness of the tourist trap in Berlin. In Budapest and here in Kaposvár they were but one reminder of Hungary’s not-so-distant Soviet history. The capital city today stands as a living history book, showcasing nearly every epoch of the Nation’s rough and tumble timeline. From the Citadel and Castle atop the Buda hills, to the Trabbis and EU projects in Pest that make up Budapest’s workaday landscape, it is all present and accounted for.

One thought on “Trabbis and Transitions: First impressions of Hungary”

This site uses Akismet to reduce spam. Learn how your comment data is processed.