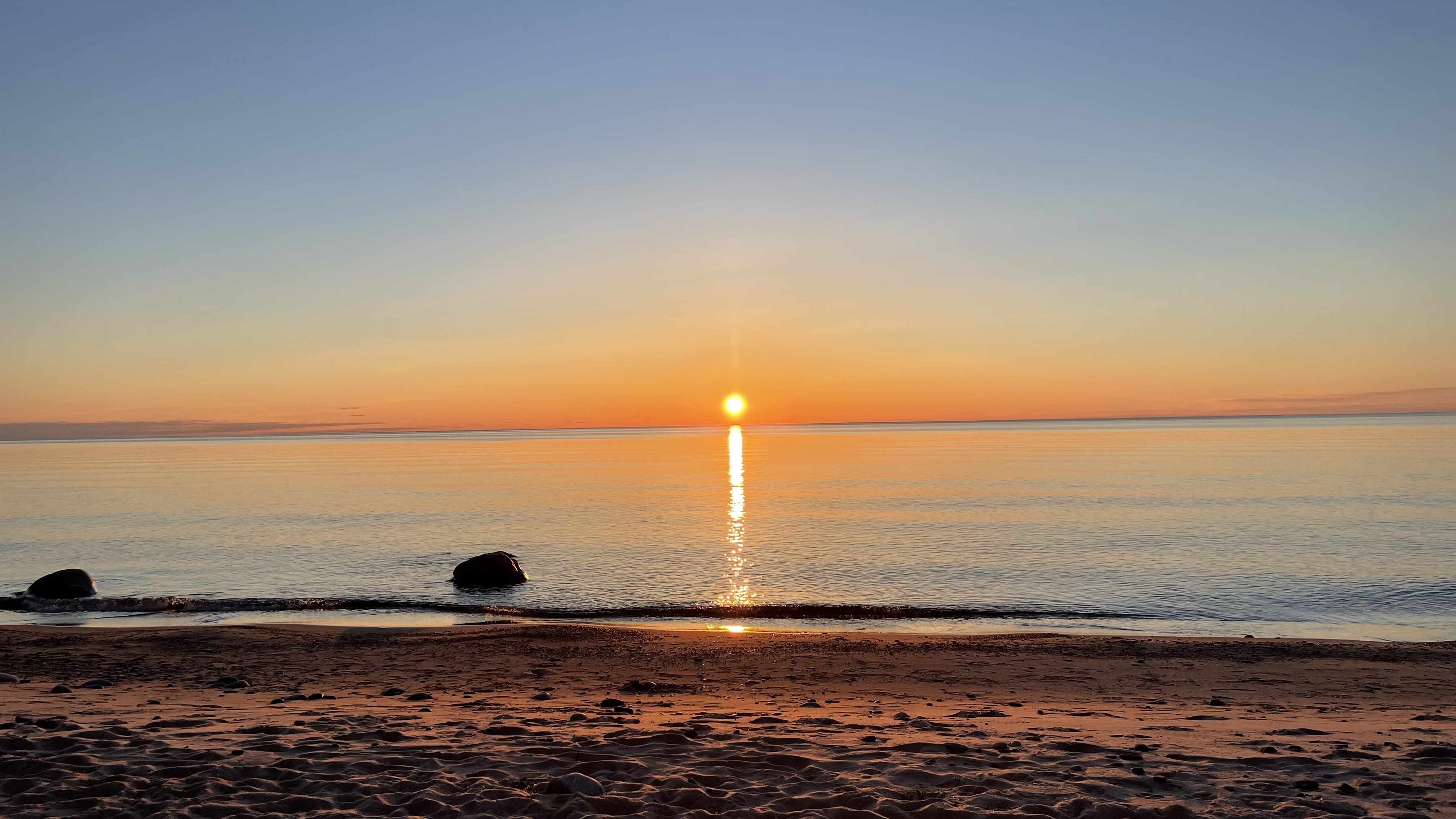 This year marks our second in a hopefully-annual tradition of camping in the north country over Memorial Day weekend. Last year we were in the Porcupine Mountains of Upper Michigan, the Apostle Islands National Lakeshore, and Madeline Island. This year as we charted our trip, we knew we’d end in Cornucopia on the weekend, but we had the choice of whether to go to the familiar Porkies, or see something new. Early on I had the itch to check out Pictured Rocks, the first National Lakeshore established in the US, and, surprisingly, among the closer national parks to Milwaukee.

Our standard for a campsite was perhaps a bit unrealistic. Our site at the Porkies last year is hard to beat when it comes to water access and sunset potential. Eventually, Danielle found Hurricane River Campground on the eastern end of the park. It turned out to be a fantastic place to set up camp for a couple nights — knowing what we know now, we’d even have stayed longer.

Pictured Rocks was established in 1966 as the first National Lakeshore (there are four now; a fifth turned into a national park in 2019) but it’s glory was known by both the native population and colonists for centuries. Together, they are 42 miles of cliffs, caves, stacks, sandy beaches, and the ecologically unique Grand Sable Dunes along the southern shore of Lake Superior.

From what we know of the late 17th century Ojibwa’s view of the rocks, they commanded ”fear and veneration” for their role and were among the works of a “marvelous array of spirits.” The Ojibwa were proven correct time and again over history. Perhaps if the colonizers had showed similar reverence, and deference, to this land’s power, the Upper Peninsula might have had a very different history than it does today, but where is that not true?

19th Century Americans turned the UP into a capitalist fever dream. The area around Pictured Rocks was no exception. Instead of protecting or pursuing balanced management of old growth forests, these colonizers charted a path focused entirely on resource extraction: mines, clear cut timber, and little care for what was lost along the way. What little conservation existed in these areas introduced exotic, non-native species to places like Grand Island and helped them thrive at the expense of the endemic ecosystem.

Finally, in 1966, the Pictured Rocks National Lakeshore was protected from future extractive harm and given over to conservation and preservation of the landscape. In 1995, the Park Service wrote an administrative history of the area, and it’s well worth a read to understand just the kind of havoc humans, colonizers specifically, wrecked on this land. The citations and bibliography alone are worth a skim.

These rocks make you work. No easy way to get there. The sea cliffs rise hundreds of feet out of unpredictably deep water. It’s work to understand the complexities of the Grand Sable Dunes. You can catch a cruise to observe from the water, but never too close for too long because only nature can tell when a piece of cliff might come toppling off the ledge. Like many national parks, you can experience it as the NPS curated the land, science, and history. You can study the landscape but unless you’re a geologist, likely only imagine what happened, and how long ago, to build a sea arch and then again when it collapsed.

If you’re anything like me, the NPS will captivate your imagination. It’s a special kind of wonderment, trying to imagine how time plus water over rocks yielded this magnificent stretch of shore in this specific spot. You’ll have questions, I know I do:

How are cliffs are sheltered enough from sun and heat to retain snowpack until July?

How much thawing and re-freezing of water is required to pock a perfect hole into a slab of sandstone? Or to cut a cave big enough to drive a ferry boat into safely?

How does a white pine shoot a root across a stone ridge over to soil, and how can it possibly take in enough nutrients to grow from, essentially, only that one root? How does it continue to survive when that ridge collapses into the lake below?

What kind of conditions whip up sand enough to push a dune filed over a pine forest? How often does it happen and how long are the trees able to sustain life submerged before becoming a ghost forest?

What will these waterfalls look like at the end of my lifetime? At the end of our kid’s? In 12 generations?

The eastern edge of the park is served by the town of Grand Marais, MI sheltered from the lake by a bay and breakwater. The earth is sandy: Extends off the Au Sable Dunes field; diminishes into shore. A small marina serves the community, bringing in tourists, recreations, supplies, and fishing boats. The region is so remote it is almost impossible for city folk like us to imagine year round life. If we did though, we would surely occupy our time reading the lake, watching it change the landscape, and us.

I’ve heard a lot about (probably wealthy) people from places threatened by climate change are buying up homes in the Great Lakes region as a “climate refuge.” It’ll be warmer up there soon; plenty of water, I guess is the thinking. To the extent it is a real trend, it worries me. What kind of intrusion on the ecosystem awaits us? The second growth tree canopy, planted by the CCC, only began to mature in the last few decades.

Will these climate colonists repeat mistakes the original settlers made in seeing this place as their personal paradise replete with capitalist potential? Or will they take a more anti-colonial and respect the people, creatures, and landscapes that preceded them? Will they go further and repair the wrongs of the past? Only time will tell, I suppose.