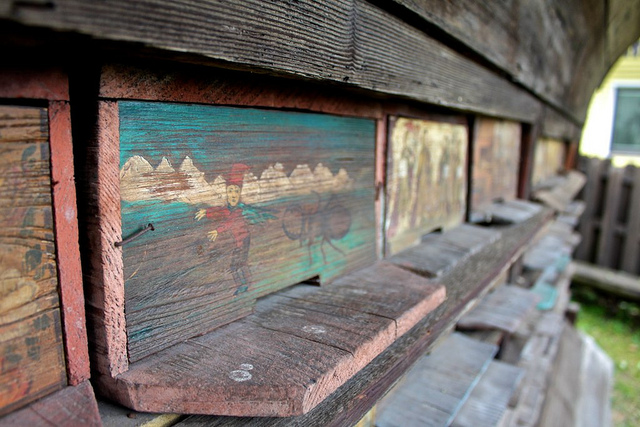 A post inspired by our friends at Just a Rough Draft, where they blog about creative concoctions and exotic foods they encounter from around the world, we turn this week to a recipe made from scratch.

While on our recent week’s vacation to Slovenia, we learned a lot of things about the Slovenes. They are high adventurists, Slovenes can be found doing just about every adrenaline pumping activity on the planet. They are proud of their history, just about everyone we talked to had something to say about the late Yugoslav leader Tito, who ruled the country not with an iron fist, but a pragmatic approach to socialism; it was his leadership that kept the country together, and the absence of it that ultimately led to its demise. Most importantly for this blog post, we learned they are beekeepers. About 1 in every 250 Slovenes (or four per thousand) keep a hive for themselves which means in the fancifully quaint city of Bled, population 3,000, there are probably about 12. At the market in Piran, Slovenia’s coastal paradise, and in the capital Ljubljana (lyou-bYAHna), we found dozens of varieties of honey.

To be quite honest, before the honey festival here in Kaposvár at the end of September, I didn’t think much about the different sources of honey, only that it came from bees. It turns out that honey takes on a multitude of flavors and consistencies depending on what flower it comes from. At the honey festival we sampled many varieties, and in Slovenia decided, since it is such a part of the nation, to buy some real Slovenian honey.

The linden tree has historical significance for Slovenia. Our tour guide in Bled, Tina, told us that back in the day the linden tree and a point of religious significance marked the center of town. The linden tree functioned essentially as a city hall. Around the tree were arranged large stones. During the day the women of the village would gather there to hang laundry and talk, and by evening it became a public forum—mostly populated by men, from the sounds of things—for anyone in the village. The stones signified a seat for each of the village’s farms. People would gather under the linden to discuss issues of public importance. As a rhetoric person, I found this wonderful.

Linden was a natural choice then, for our honey purchase. We could have bought just about any kind of honey one could dream up, but given the political and rhetorical importance, we gave linden honey a shot.

Once we got home I decided that I would attempt to bake with the linden honey. Anyone who follows me online knows I’ve become something of a bread enthusiast these days. I bake at least one loaf a week, and have been experimenting with different recipes. For our recent Thanksgiving celebration in Budapest, I decided to bake two loaves of bread: a potato bread modified from a recipe at The Fresh Loaf, and something from scratch. The result of my experimenting, a loaf of rye linden baguette. The taste test earned it rave reviews in Budapest this weekend, so if you can find some linden honey, give it a whirl for yourself: