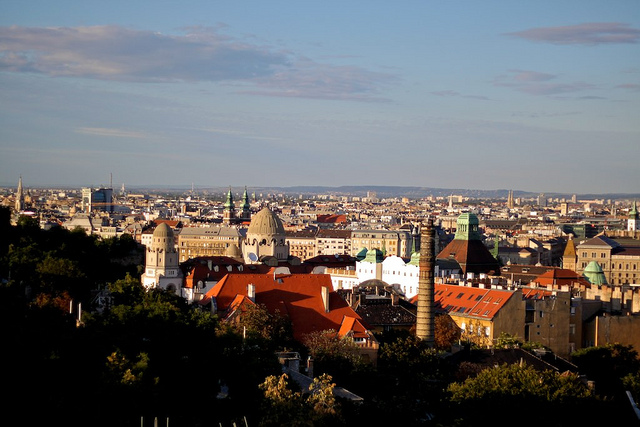 Some cities are easy to love. Budapest is one such example. With Korea still lingering in my mind, I’ve unsuccessfully resisted the temptation to compare my last home with my new one, and the differences are many. Seoul is like an intimidating jigsaw puzzle that you stare at for weeks before finding a corner piece, but the evolving image is striking. No need to toil over a card table, Budapest’s puzzle comes put together and all visitors are left to do is enjoy it, which is exactly what we’ve done.

Waking up every morning with a view of Hungary’s Lady of Liberty, reaching her hopeful palm leaf towards the summer sky, she’s not the only thing our hilltop view has to offer. With a quick roam of the eyes over leafy trees and rust colored rooftops, you can see the sunny domes of the Gellert Baths, the rippling ribbon of the Danube River, and every so often the yellow blur of a tram making its way across Liberty Bridge.

Drink as much as you like, it’s clean, free, and flowing all day.

From our hilltop hostel, aptly named Hostel Hill, perched on the south side of Gellert Hill, we look out on the relatively quiet Buda side of the river-split capital. A short walk brings into view a large, column-backed statue of Mr. Gellert, who, with his hand upraised, could be mid-sermon. It’s a fitting way to immortalize the man in stone. It was the very hilltop his statue now stands on that Pagans, fed up with his efforts to convert the lot of them to Christianity, stuck him in a barrel of spikes, and gave him enough of a nudge to send him on an ill-fated tumble down the hill and into the river.

Little remains the same at it was the day of Gellert’s doomed descent down the hill that now bears his name, but this isn’t the only harsh ending in Hungary’s history. The country’s past is full of stories with cringe-worthy ends, which may explain why the common thread in our culture classes can be summed up in three words: Hungarians are pessimists. Or if you’d prefer a characterization more wryly spun, as CETP’s in-country director Hajni liked to say, Hungarians are “well-informed optimists.” Whether it’s the promptly stomped revolution of 1956, the years spent under dictatorial communist rule, or the country’s continuing financial struggle, a cursory glance at a Hungarian timeline offers hints as to where this gloomy outlook and distrust may originate.

If you look hard enough, the seeds of this culturally shared attitude show in the capital city. A once over of the skyline, taken in while sipping wine on the lower supports of Liberty Bridge or from an alcove of Castle Hill, shows both the city’s good and the bad. In between the playful examples of art nouveau architecture and dignified statues are just as many dilapidated buildings and boarded up windows. Under the forgiving cover of darkness though, all that fades into a black backdrop for Budapest’s warmly lit highlights: Parliament, the Castle, the Basilica of St. Stephens, Szechenyi Chain Bridge, and others. Each surviving over time (and renovations) to rise as the eloquently hopeful beacons of Budapest’s skyline.

Budapest is pretty any time of the day, but at night the sprawl of buildings, some dilapidated and sagging with age, are cast in darkness and the city’s best sites are set aglow in warm lighting.

While I hesitate to use such sweeping cultural generalizations as, “Hungarians are pessimists!” I see their use for the sake of brevity in a crash course for new arrivals summing up the Hungarian people in just four days. I also see their shortfalls. Like Budapest’s glowing evening skyline, despite years of strife and struggle and its hardening influence on the people, Hungarians have persisted and continue to move their country forward (although the pace may be a little grueling). It’s just one aspect that makes a week in Budapest worthwhile.

Seoul and Budapest both share a violent and repressive past. Seoul’s appeal revealed itself over weeks and even months, often after confusion and frustration, but ultimately with great reward. But Budapest’s allure is out in the open, obvious and easy to access, everywhere you turn on its easily navigable streets.

There’s plenty more photos where that came from on flickr.

If you’re visiting Budapest and want to know more about Bishop Gellert, or more likely the hill that carries his name, this is a good start.

3 thoughts on “The Best of Budapest: The View from Hostel Hill”