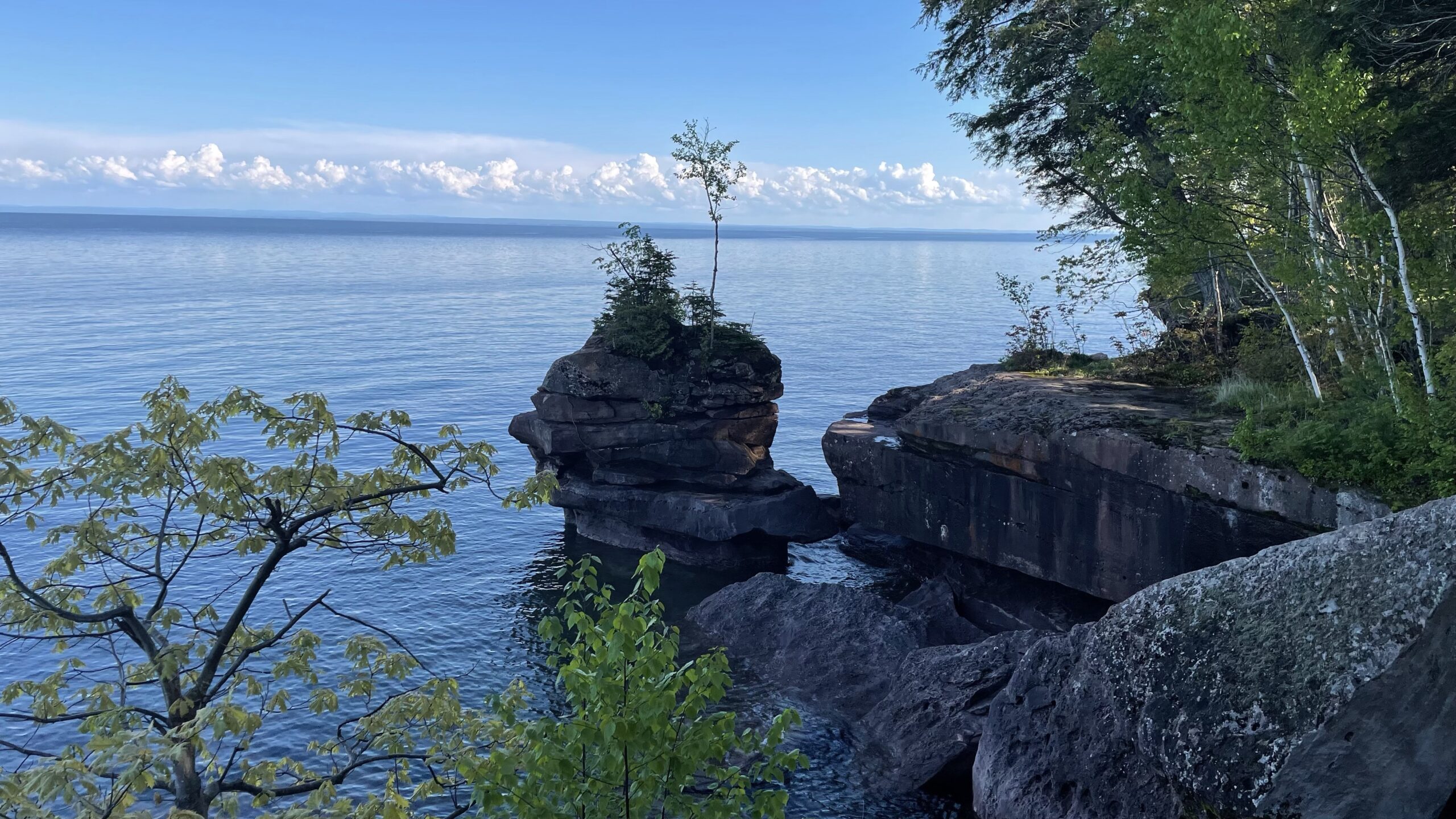 After nearly a year of abstention from all non-essential travel, with vaccinations in our immune systems, and receipts to prove it, we ventured out into the wilderness of northern Michigan and Wisconsin to take in the stunning coastline of the world’s largest body of freshwater (by surface area): Gichigami, or Lake Superior.

Our adventure began at Union Bay Campground in the Porcupine Mountains Wilderness State Park in Michigan’s upper peninsula. Danielle and I first visited this park in 2015 while we were en route to Denver from DC. We’ve been back several times since to do day hikes up to Lake of the Clouds and along Presque Isle River’s the waterfalls. But this park, with its 90 some miles of trail, always beckoned us back for a longer stay we finally redeemed this year.

Traveling from place to place, I often marvel at the luckiness of creatures who call some of the best places the world has to offer their humble homes. A mere human couldn’t scrounge up enough of anything to land themselves the right to set up shop in Spain’s Alhambra. Yet a number of pigeons air their morning coos  over the Sierra Nevada Mountains everyday, nestled among the bright mosaics of that ancient palace. And just imagine the view those plump marmots enjoy each morning, hunkered down like carpet across the alpine terrain of the Rocky Mountain’s higher elevations. END_OF_DOCUMENT_TOKEN_TO_BE_REPLACED

We took our first sip of makgeolli back in late September on the first night of our farming adventure with Wooriwa, pouring from enormous drums like the kind my Grandpa once used to fill up the pontoon with gas at the cabin. Since then, we have become enamored with the beverage, and perplexed by its composition. About a month ago we had the pleasure of learning how the beverage is brewed by the people who knew it best: fifth generation professionals. END_OF_DOCUMENT_TOKEN_TO_BE_REPLACED

Do you ever wake up in the morning, pour some milk into a bowl of cereal, and think, “Hmm, I wonder what on Earth children in South Korea eat for breakfast?” Find the responses to this query and plenty of other  questions about the daily life of a student in South Korea in this video created by fellow teacher Seth Mattern.

Seth is a certified educator in the United States, and after the logistics of international pen-pal projects and video exchanges proved too messy, he created this website with another teacher in Colorado  as a convenient forum for cultural exchange between students the world over.

In addition to this, which I imagine is only the first of many videos to be posted in the future, poke around the website to read some essays by both Korean and American students, and responding comments. If you’re an educator anywhere in the world, and are interested in participating in the site, just send an e-mail and I would be thrilled to put you in touch with the appropriate people. Even if you’re not an educator, I know the kids would love to read any comments and answer any questions you may have.

These students are in fourth and fifth grade and recorded this around 8:00 at night, since they stay at our school until 9. You’ll find that later nights and longer hours spent in schools of all varieties are not the only differences between Korean and North American students. And as for breakfast in Korea, I’ll let the kids speak for themselves, but I suspect many will be surprised by their answers. Enjoy!

There is something surreal about emerging from the underground isolation of a subway station into the open air of a new place. Our first Saturday morning steps out of the station and onto one of Busan’s humming city streets were no exception. But this wasn’t just any subway stop in Busan. This stop, I knew, led to one of East Asia’s largest fish markets among the city’s top attractions. Still, nothing could have prepared me for the sights, sounds, and oh-my-goodness, smells of the Jagalchi Fish Market.
END_OF_DOCUMENT_TOKEN_TO_BE_REPLACED